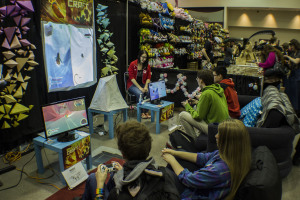 Last weekend we had the chance to demo SmuggleCraft to the public for the first time since announcing the game, which was quite a bit nerve-wracking since we had no idea what to expect from folks. I mean, WE like the game, but what would everyone else think? Turns out, they like it too! (Whew!)

We were invited to Anime St. Louis, a huge local anime convention where we managed to transform our booth space into a SmuggleCraft-themed game lounge, complete with a couch, pillows, and cozy chairs. It was definitely one of the comfiest spots in the con. 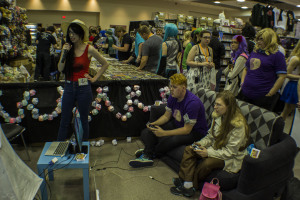 Carol commentates the final round of the tournament as Marceline the Vampire Queen, because why not?

As a last-minute surprise, we managed to show off the all-new multiplayer mode for the first time ever, which people immediately gravitated to (though folks still definitely enjoyed the single-player campaign mode quite a bit; some even played for well over an hour). We hosted the very first (of hopefully many) SmuggleCraft multiplayer tournament, which saw over a dozen competitors and some intense gameplay. The final round boiled down to a very heated sudden-death!

This guy Brian (left, on the couch) won the tournament, which was cool, especially since he had some rad Stephen Universe cosplay going on.

We also had one of our very first demo reviews written, thanks to a writer from hardcoregamer.com who called it a “hovercraft joyride!” Consider us thoroughly flattered. 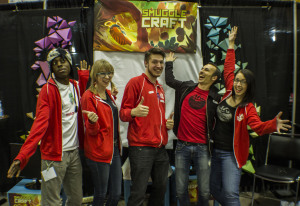 All in all, it was an excellent event. Lots of people were glad to hear that not only is the game coming for Playstation 4, but also that the game is up on Steam Greenlight. A lot of folks promised to help us get the game some Greenlight votes, which gives us a lot of hope topped with some warm and fuzzy feelings.