At Happy Badger Studio, we may be best described as “experienced beginners” when it comes to promoting our games. We’ve been making games for four years, and have had the opportunity to exhibit at a few St. Louis-based conventions and a number of other small local demo events. Even so, we know that we still have a lot to learn when it comes to operating a successful demo booth at a large-scale expo. As development of our latest game, SmuggleCraft, has gained momentum, we’ve begun to seek out ways to expand our horizons and put the game in front of players and press on a more national level. When one of Indy PopCon’s organizers reached out to our local game dev community about available booth space, my team and I at Happy Badger Studio made the big decision to take SmuggleCraft out-of-state for the first time to PopCon in Indianapolis, Indiana.

We’ve never shown any of our games outside of our hometown of St. Louis, MO, though we do have the benefit of a few years of local convention experience. We felt PopCon would be a good first out-of-state event for us, based on the event’s relatively close proximity to St. Louis (4ish hours by car), the reasonable cost of booths, and the moderate (but not overwhelming) scale of attendance. We were also enticed by promises of guaranteed stage presentation time, opportunities to connect with press and Let’s Players, and automatic entry into the convention’s Indie Reboot Awards—all good opportunities to fulfill our ultimate goal of increasing awareness and finding new press contacts. 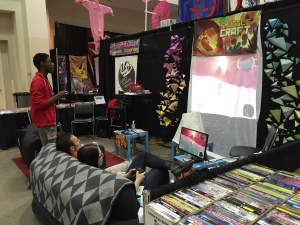 SmuggleCraft at Anime St. Louis. DEMOING IN THE LAP OF LUXURY.

We’d recently demoed SmuggleCraft at Anime St. Louis, a mid-sized local anime convention, where we had a huge 20’x10’ corner booth space, an abundance of booth volunteers (like, eight, because of reasons), and plenty of amenities (free internet, parking, expo furniture, and electric), so we knew we were going to have to lower our expectations a bit for our Indy PopCon booth plans. We needed to scale down and decide what was important from the previous setup, and what could stay behind, knowing we would only have a 10’x10’ space and three people at the PopCon booth.

Since one of the most appealing aspects of our demo is the local competitive multiplayer mode, we felt it was important to have our big comfy inflatable couch return to the booth. Since the couch would be a primary focus, we designed our booth space around the 6’x3’ seating area, which would face a 32” TV that players would use. We chose to use our short-throw projector against the back of the booth so that visitors coming from either direction could easily see gameplay. We didn’t consider until we got to the convention, however, that the demo computer would need to be hooked to both the television and our short-throw projector via HDMI, so we spent most of Friday morning driving around Indianapolis looking for an electronics store that carried HDMI splitters. 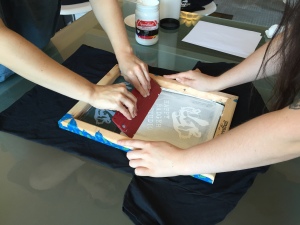 Indie Protip: Print your own t-shirts to save cash and cover yourself in paint!

As far as handouts and promotional materials go, we already had a 4’ x 2’ SmuggleCraft banner, a handful of 9”x17” posters, 2.25” Happy Badger Studio buttons, and 500ish business-card-sized flyers printed for prior events, so all we had to worry about for PopCon was our signature Happy Badger Studio t-shirts. We hand-print our own t-shirts in the studio using handmade custom screens, so it’s pretty easy for us to keep the cost low. We purchased about 40 blank t-shirts ($12 per pack of 4 at a big-box store), a big tub of white screenprinting paint ($25), enlisted our intern Mila for an extra hand, and got to printing. It took about $150 and a day’s work for 40 t-shirts. 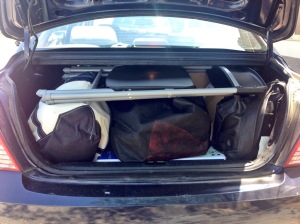 See Mom? All those hours of Tetris DID come in handy.

We arrived in Indianapolis on Thursday night with about an hour left to load in, so we got everything from the car and into the booth as quickly as possible (somehow it all fit in a wee Hyundai Elantra). We unloaded in one trip, blew up the couch, set up the TV and projector, and hung the SmuggleCraft banner (which we regretted getting without center grommets, only corner grommets). We decided we needed dowel rods to keep the bedsheet flat in place to act as the projector screen, so we held off on hanging it until we were able to make it to a local hardware store the next morning. We also used the extra time to take the sheet to the hotel to iron out the wrinkles as well as we could. In total, it took about two or three hours to set everything up over the two days.

Things we had that made setup way easier: large hooks (borrowed from the expo company), zip ties, tape (of various forms—two-sided, electrical, and duct are most useful), rubber bands, safety pins, binder clips, scissors, power strips, extension cords, scratch paper, pens/sharpies, and a tool set (mostly just for pliers and a screwdriver). We keep all the little stuff together with a handbag organizer, which helps a lot when it comes to finding small things. 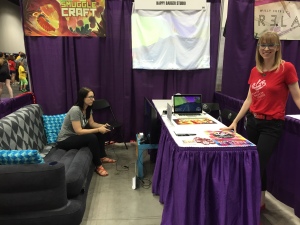 Dana, left, warms up the couch as I preside over the swag.

We hoped to have two separate demos running at all times: one for players on the couch, and one for press and/or overflow, however we had framerate problems on our smaller laptops, so we stuck to the single demo station. We were at a high-traffic corner booth, so we discovered that having the television facing one pathway and the projection screen facing the other was a great way to draw people to the game. While the projection screen wasn’t perfectly flat or ideally lit (the lights in the expo hall were brii-iight), it was still visually interesting enough to get people intrigued enough to play.

Now, let’s get to the important part: everyone loved The Couch. In fact, the reason I’m writing this is because our booth neighbor, Willy Chyr, liked The Couch so much that he suggested we do a postmortem on having a Booth With A Couch (thanks, Willy). We added colorful throw pillows and a blanket because we felt it was important for our booth to feel like home; to hearken back to couch-centric local multiplayer days. It brought an element of comfort to gameplay that is uncommon at convention booths, and we had a number of visitors return all weekend to duke it out with their friends on The Couch. One thing to note about inflatable couches, however, is that they are NOT accessible for all body types, so we strongly recommend you offer alternative seating for people who are more comfortable in sturdier chairs (which is precisely why we brought extra folding chairs).

We gave t-shirts to especially enthusiastic players and friendly repeat visitors, and offered posters and buttons to anyone who played the demo or signed up for our mailing list. All of the freebies were very well received, and resulted in a lot of new friends and fans who couldn’t wait to proudly show off their shiny new SmuggleCraft poster. 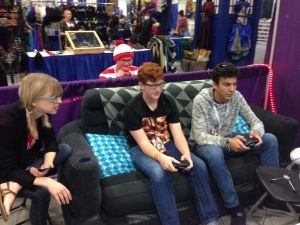 YouTube Let’s Players Bobert with a B (Center) and Coolio McJoe (Right) recorded themselves playing SmuggleCraft at our booth. Somehow I didn’t even see Waldo while I spectated.

One thing that sets Indy PopCon apart from other comic and pop culture conventions is the sheer number of YouTubers and Let’s Players in attendance. PopCon did a great service to its exhibitors by sending a press list in advance, which we used to introduce ourselves, set up appointments, and start conversations before the convention. Through these conversations, we realized we wanted to be especially accommodating to on-site Let’s Players. We let them know that we had screen recording software and a Blue Snowball mic that they could use, as long as they brought their own storage device to save the video onto. It may not be as high quality as what they’re used to, but the few Let’s Players who took advantage of our recording tools were very grateful that we made it available to them.

Prior to the convention, I worked up a spreadsheet summarizing our press appointments and various panel, podcast, and presentation times. Having this printed out as a physical copy at the booth was very helpful to keep us all organized and aware of who was coming and going when, without having to worry about constantly checking our phones for calendar notifications.

We definitely could have cut back on costs for hotel and food, especially if our Airbnb hadn’t cancelled on us at the last minute or had we chosen to stay somewhere farther from the convention center. I should acknowledge that we like to indulge sometimes while traveling, which may be a bad habit, but we find the occasional drink and nice dinner helps relieve some of the stress of the convention. It would also be good to note that the $1000 for equipment was not all at once, as much of the equipment had already either been purchased for use in the studio (like the projector) or for previous events (like the couch); the total equipment cost in the breakdown is just to give you an idea of what you may expect to pay if you wanted to create a similar setup from scratch. The two main big-ticket items we bought specifically for PopCon were the 32” TV for $200 and the HDMI splitter for $100, both of which we intend to use regularly in the studio and at future conventions. The Couch only cost about $70, and has now valiantly survived six full days of considerable convention use. 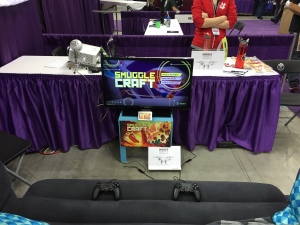 Thank you for your service, brave couch.

I have a lot more detailed lists of expenses and equipment that I’m not including for the sake of avoiding information overload, but if you’re interested in a more detailed breakdown, feel free to email me.

Overall, we had a really excellent time at Indy PopCon, and while it resulted in a more costly demo than we were expecting, it ultimately felt like a successful event for us. We met a lot of great new friends and fans, and now have a number of new contacts who are excited to keep their subscribers up to date on SmuggleCraft’s development progress. We’re looking forward to bringing The Couch back to Indy PopCon next year.

This blog is a cross-post from our SmuggleCraft Dev Blog.